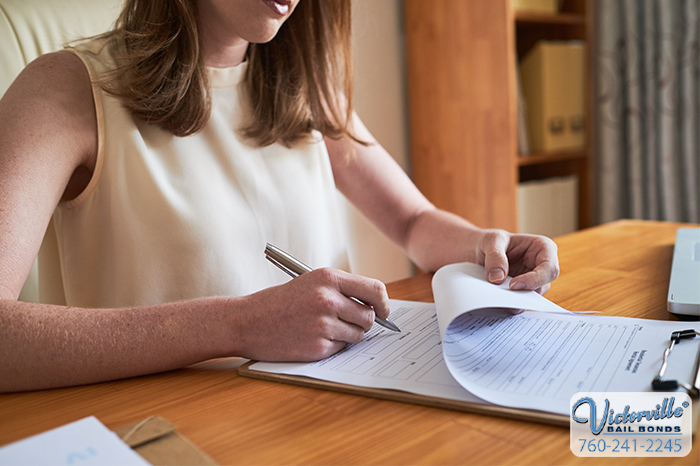 Bail is a way for you to be released from jail and resume your normal daily activities while your case slowly makes its way through California’s legal system.

It’s widely understood that once the case reaches its conclusion, you’ll get the bail money back. This would be a lot more exciting if you weren’t using grocery and rent money to spring yourself from jail.

Because most people don’t have enough money to cover their bail, they turn to companies like Hesperia Bail Bonds. In exchange for a nominal fee, usually 10%, we pay your bail.

In some situations, we do require that you find someone willing to co-sign for the bail bonds. Reasons for this could include that you are what we consider a flight risk, you don’t have steady employment, or because you don’t have enough collateral. This co-signer is formally referred to as an Indemnitor.

It’s incredibly important that the person who steps up to act as your indemnitor understands exactly what they’re getting into when they co-sign your bail bond agreement.

The single main function your indemnitor has is making sure that you are on time for every single one of your court appointments. Missing a single court appearance is considered a failure to appear. Not only will the judge issue a bench warrant for your arrest, but we will also be forced to bring you back to jail. You may not have a second chance at bail and there may be additional charges filed against you.

The other thing the indemnitor does is make sure you don’t violate your bail agreement. Failing to show up for court is just one way to do this. Other examples include breaking the law while you’re out on bail, staying out after curfew, or leaving the county.

If you break your bail bond agreement, your indemnitor could be required to forfeit whatever they agreed to use as collateral.

The best thing about contacting Hesperia Bail Bonds is that we understand exactly what you’re going through and want to do whatever we can to help. In addition to our famous zero-interest bail bonds and flexible payment plans. We also have a reputation for being a company that truly cares for its clients and who will do just about anything to keep the entire process low-key and stress-free.

Whether you need bail or you want to help out a friend by co-signing for them, contact Hesperia Bail Bonds today. All consultations are 100% free. You can reach us by calling 760-241-2245 or clicking the Chat With Us link.